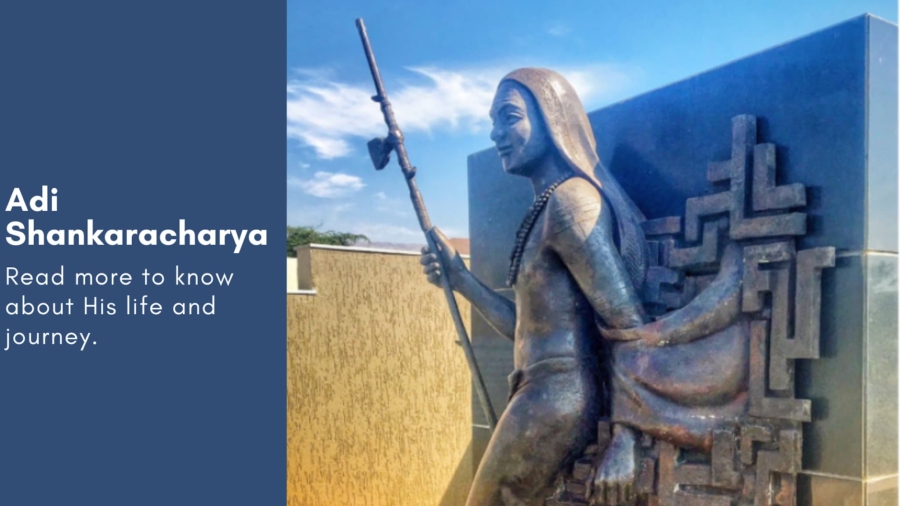 by CIF Admin
with no comment
Others
Sri Adi Shankaracharya is a prodigy and an exceptional Master. He is a saint, philosopher, poet, commentator, rejuvenator and social reformer. Adi Shankara was born at Melpazhur Mana, now renamed as Adi Sankara Nilayam by Pujya Gurudev Swami Chinmayananda. His birth-place is located in Veliyanad, a small village in the Ernakulam district of Kerala.

A composer of Vedantic treatises

He was the proponent of Advaita Vedanta and has written commentaries on the Upanishads, the Bhagavad Geeta and the Brahmasutras. Adi Shankara’s works also include numerous stotras (hymns) and prakarana-granthas (preliminary texts). Most of the stotras were composed by him extempore, such as the Kanakadhara Stotram, Maneesha Panchakam and many others. A thorough reading of his works helps us in understanding the places he had covered and the people he had met as he toured the country on foot.

The life of a philosopher

There are a lot of interesting incidents related to the life of Adi Shankara that would leave one in complete awe. He toured India to propagate the Upanishadic tenets through discourses and debates with other philosophers. The four mathas established by Adi Shankara, namely, Jyotir Pitham in Badari, Govardhana Pitham in Puri, Sharada Pitham in Sringeri and Kalika Peetham in Dwaraka played a pivotal role in the historical development, revival, and spread of post-Buddhist Hinduism and Advaita Vedanta. These mathas located in the four corners of the country are responsible for safeguarding the four Vedas – Atharva-veda, Rig-veda, Yajur-veda and Sama-veda respectively. Had he been born today, he would have been admired as a superhero with no less than a million followers on Twitter. Let’s take a tour through the life of Adi Shankaracharya. 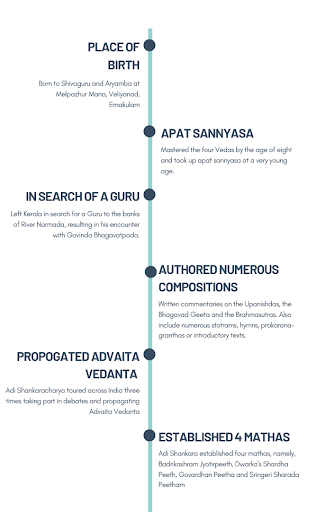 Adi Shankara’s parents, Shivaguru and Aryamba, were childless for many years. They prayed at the Vadakkumnathan Temple in Thrissur for a child. Legend has it that, pleased with the couple’s prayers, Lord Shiva incarnated as Adi Shankara. As a child, he was extraordinarily brilliant and had mastered the four Vedas by the age of eight. He was inclined towards Sannyasa from a very young age and had sought his mother’s permission for the same. She was reluctant to agree, until one day when a crocodile attacked Shankara as he was bathing in a river and he requested his mother to let him take Apat-sannyasa. As she agreed, Adi Shankara recited the mantras to make a renunciate of himself and the crocodile miraculously released him and he came out safe.

In search of a spiritual guide

Adi Shankara then left Kerala and his search for a Guru led him to the banks of River Narmada, resulting in his encounter with Govinda Bhagavatpada. Adi Shankara’s famous composition, the Dashasloki was born during this meeting when his Guru asked Shankara for his identity and he replied in 10 extempore verses. Impressed by his genius, Govinda Bhagavatpada accepted Shankara as his disciple and taught him the philosophy of Advaita Vedanta, which is the essence of all the Upanishads. Later, his Guru commissioned Shankara to write a commentary on the Brahmasutras.

Adi Shankaracharya then set out on a mission to spread the message of Advaita Vedanta. He travelled across India taking part in discussions and debates defeating scholars of various faiths and philosophies. Many of them whom he defeated, most of them eminent scholars in their respective fields, immediately became his disciples. They then started practising the philosophy of Oneness under the tutelage of Adi Shankara. They then spread the word of Advaita to their followers thus bringing in a wave of renaissance to Hinduism.

Adi Shankara once visited the Sarasvati Temple that houses the Sarvajna-pitham or Throne of Omniscience in Kashmir. This temple had four doors, each door for the scholars from the four directions. Since no scholar from South India had ascended the Sarvajna-pitham, the southern door which represented South India had never been opened. However, Adi Shankara opened the southern door by defeating all the scholars of various scholastic disciplines, in debates on topics such as Mimamsa, Nyaya, Vedanta and other branches of Hindu philosophy, and then ascended the Sarvajna-pitham.

Towards the end of Adi Shankara’s life (when he was 32 years old), he travelled to Kedarnath-Badrinath in the Himalayas, and attained Videha-mukti (freedom from embodiment). There is a samadhi-shrine dedicated to him behind the Kedarnath temple. However, there are various narratives on the location of his last days — some opine that it was Kanchi in Tamilnadu, while others say Trichur in Kerala.

The expeditions of Shankara

At a very young age, Adi Shankara gained mastery over Vedanta, Yoga and Tantra. He, being a phenomenal orator and commentator, united the people of India through his travels and works. On all the lands he set his feet, Shankara and his teachings were accepted as supreme and were followed with great reverence. It is always a wonder for common folks like us to even comprehend the fact that someone could accomplish so much in such a short time span of 24 years, starting from his life as a sannyasi from the age of eight.

CIF, located at Adi Sankara Nilayam, the hallowed maternal birth-home of Sri Adi Shankaracharya has a panchaloha (an alloy of five metals) idol consecrated at his birth-room along with an akhanda-jyoti or a lamp that stays lit throughout the year. Apart from the daily pujas, every year, special pujas are offered to the idol on the auspicious occasion of Shankara Jayanti. As part of CIF’s Home Study Courses, there are a number of courses and webinars that deal with the compositions of Adi Shankara. To know more about and to enrol, visit: https://chinfo.org/home/courses.

About the author:
Aiswarya Jayaprakash is a Creative Writer at CIF with a Master’s degree in English Language and Literature. She loves writing poems and has been working on the content related tasks whilst at CIF.