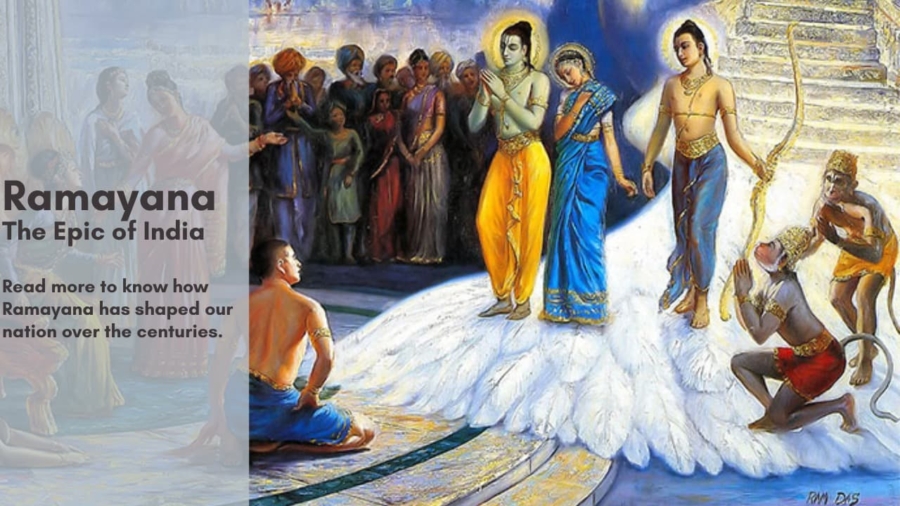 “Whoever reads this legend of Rama, will be verily liberated of all sins.” – Ramayana 1.1.98

I have always wondered if there is anything in India that is shared across different communities geographically, culturally and linguistically. I must say that the first thing that comes to my mind is nothing but Valmiki Ramayana. It is venerated as the Adi Kavya and as an age-defying classic of the pan-Indian literary tradition. Along with its status as Kavya, Ramayana is also considered as an Itihasa which literally means “so it happened”. However, what is so striking about this ancient text is its time-transcending nature!

Ramayana has always been a tradition in India. When I say tradition, it must be noted that I am not talking about something which pertains to antiquity. Ramayana is still a celebrated tradition, something that has always been there and something that continues to exist. Interestingly, Ramayana is one of the most widely read texts in India. The Ramayana parayana (reading of Ramayana) is a widely practised convention in the households of India. For instance, in Kerala Ramayana masam (Ramayana month) is celebrated in July. Ramayana parayana is an inevitable part of this celebration. Also, it can be seen that festivals related to the story of Rama are celebrated across India.

Ramayana is always an integral part of the collective memory of India. This shared memory fashions the history of the nation. Interestingly, almost all the different regions in India have a narrative of their own which connects the region to the Ramayana narrative. For instance, the place called Jatayu para (The Rock of Jatayu) in Kerala is believed by the natives of the region as the place where Jatayu in the Ramayana was defeated by Ravana during Sita’s abduction. However, in Valmiki Ramayana, the spot where Jatayu was ousted by Ravana is somewhere near the Godavari river. These contradictions between the original text and the regional narratives lead to an interesting perception. It shows that different regions in India have different narrative variations of the same story. There are different literary versions of Ramayana along with diverse oral narratives. Adhyatma Ramayana from Kerala, Kamba Ramayana from Tamilnadu, Tulsi Ramayana and Ananda Ramayana are all examples to mention a few. While the Adhyatma Ramayana, as the name suggests, focuses upon the spiritual aspects of the Ramayana narrative, Kamba Ramayana asserts Rama as one of the incarnations of Lord Vishnu. Ananda Ramayana is an anonymous text in Sanskrit which revolves around the story of Rama. Tulsi Ramayana, also known as Ramcaritmanas, is a poem in the Bhakti tradition. Kalidasa’s Raghuvamsa is another important text that employs the story of Rama to create an exquisite work of art imbued with Sringara Rasa (aesthetic emotion of love).

Apart from its merit as a Kavya and as an Itihasa, is there anything beyond them that marks Ramayana’s unparalleled legacy? Isn’t it something worth reflecting upon? It can be seen that all through the text of Ramayana, the practice of dharma is emphasized. The dharma adopted by Rama in his renunciation of everything for his parents, the dharma embraced by Bharata who was not blinded by the power and possessions bestowed upon him and the dharma exhibited by Sita who remained with her husband amidst all the struggles become exemplary instances of how one should remain in dharma. Rama emerges as the paragon of all virtues by being truthful to the ideal of dharma. Therefore, upholding dharma is one of the most influential spiritual ideals put forth by Ramayana. All the different personas, such as Rama, Sita, Bharata and Lakshmana, who appear in the Ramayana, act as ideal models one can aspire to become while pursuing a spiritual path. Further, the Vedantic perspective looks at Ramayana as a spiritual allegory in which Rama stands for the Self, while Sita for Maya. Therefore, Rama’s journey becomes a metaphor for the journey of the self to the Ultimate. Several other layers of allegorical interpretations are also possible for this narrative which encompasses different spiritual realities. There is no wonder that Ramayana is considered self-liberating, something that leads to Moksha.

The strong spiritual outlook along with its historical, literary and cultural significance makes the Ramayana a living tradition in India. It is a text which guides humanity to follow their worldly duties righteously and at the same time to go beyond the worldly. Ramayana is not just a legend. The story of Rama’s journey cannot be reduced to a literary work. It is something that transcends all these definitions. It is precisely the reason why Ramayana continued to exist, continues to exist and will continue to exist.