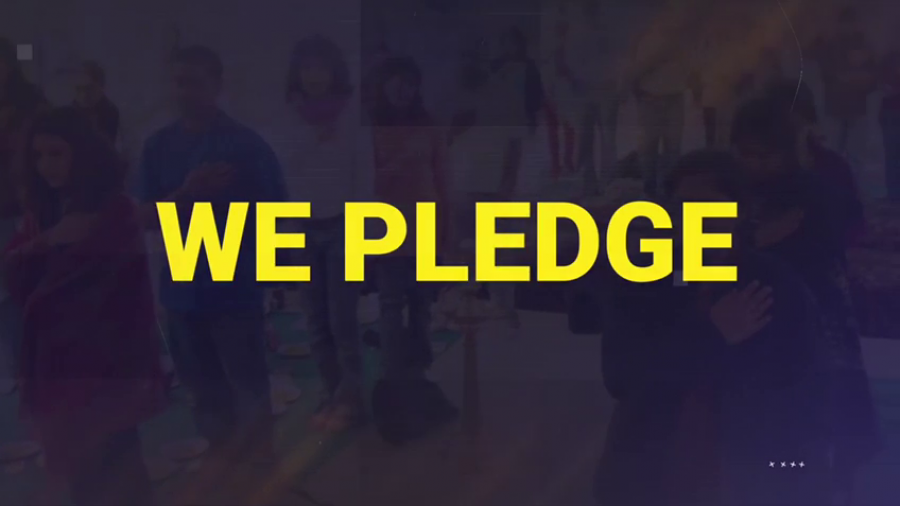 I learnt the Pledge way back when I was in lower kindergarten at Chinmaya Vidyalaya, Allapuzha. Within a year I had also been enrolled into Balvihar, where too the Pledge was taught to me. This time in Malayalam.

In both places, the Pledge was ‘chanted’ at the end of the day, at the end of the class. We all stood together and belted out the Pledge, full-throated. The moment the last words were yelled out: “OM TAT SAT”, we would all run out, homeward, screaming, as if in chorus.

Hence the Pledge to my 5-year-old mind (then) stood for ‘freedom’.

Today, 25 years later, it still stands for Freedom, but a freedom that one has evolved into after being taught how to live the Pledge.

At the age of 5 or 6, the Pledge was a capsule that we swallowed and chanted. No meanings were taught. This is in keeping hands with the Indian oral tradition. The first time I learnt its meaning was during my CHYK classes at the age of 15. We had group discussions on the Pledge. It was a subject by itself.

I began to think of the Pledge as a promise to myself.

We were told a story of how Gurudev had composed it. Gurudev was the spine of my living as he was there on the altar at home, on the walls at school and at the Balvihar. So I did not have to ask who he is. All the stories revolved around him.

Similar was the one about the Pledge. It seems that one day, during the preparation of some international camp, some members went to Gurudev and said, “Swamiji, we don’t have a Pledge!” to which Gurudev replied, “Do you have a pen and paper?” Followed by, “Now take down…”

When I learnt that Gurudev composed this fabulous promise in 30 minutes, I was wonderstruck. In schools we spend so much time researching and reviewing to formulate a pledge or a vision statement. Even the national anthem is being debated by some. But Gurudev’s Pledge has enveloped everyone. Most importantly, ‘The Pledge’ was an extempore delivery and it has remained without even a grammatical revision for all these years.

Because it was born of shuddha sankalpa.

We were also told that the Pledge is the guidance Gurudev gave to CM members and sevaks. Why? Because he is very keen that we who have come together under him should be bound together in this manner. Bound, as in unified.

The Pledge has become a sadhana for me. From a school student where I began with ‘…Courageous and disciplined…’ I found the Pledge stay with me acting as a check list ensuring I was practising them all.

Every line in the Pledge is a strong spiritual message and sadhana from Gurudev. That is why after the Yuva Veer Course, Sw. Mitrananda ji taught us ‘The Pledge’ and later at Sandeepany too, as recent as the 15th batch Vedanta Course, we had studied ‘The Pledge’ for about 6 to 7 days under Swamiji again.

Adi Sankara’s last work was ‘Sadhana Panchakam’. It contains the essence of what a sadhaka should do. Gurudev had put into ‘The Pledge’ what he did all his life, what he practised, what was his everyday religion and through it he has given us an instruction manual, as it were, for attaining Perfection. ‘The Pledge’ binds us all together while also binding us with the love of a Father, enwrapped in a commitment.

At one level it is a simple statement that says we should be like a family, have love for each other and work together. But when we start working, we find it difficult to feel that love, despite the fact that we are all trying to work for the same Mission of Gurudev.

That is why Gurudev wanted that we practise the first line: “We stand as a Family”. As for being bound in love and respect – in a family of blood relations, love and respect seems to be there or at least we believe so. Love and respect are qualities that one should develop at an individual level. The love we feel for our children may be a love out of possessiveness, or an assumed love born out of duty; but that kind of love is love without respect for the child as an individual.

Likewise, the same goes with respect which manifests in organisations. When Gurudev says “…bound together with love and respect…” – it is love AND respect; specifically because he wanted us to show both love and respect. If there is no love in respect, then that respect is just fear. Gurudev’s Pledge seeks from us love that respects and respect that loves.

So what is the quality of the love and respect I have seen? I have grown right from the kindergarten to running a Centre – all on the lap of the Mission. Be it at the Vidyalaya or the Balvihar or at CHYK or at the Yuvaveer camps or at the Sandeepany or the various projects that Mission Center Acharyas had involved me in, what I have experienced is – You are an individual and you are free; that I belong to this family and therefore I will be looked after for my development. I don’t even have to wonder about it. It is there.

Pujya Guruji says, “It is not according to your ability. It is your availability.” I have actually seen this being played out in the Mission through the many acharyas whom Gurudev has raised, the Pledge is clearly seen unfold.

I grew up in a small town where Malayalam is the language in which we not just spoke but also thought. When I started working at the Mission, I could not even put a sentence together in English. The acharya under whom I was working, I was happy being his fetch and carry boy, so grateful to be serving him. His love was the kind that respected and empowered. He straightaway gave me the editing work! I was stunned by his action. But there were many under him who held my hands and showed me the way. Love and respect, bound together.

You ask anyone who works fulltime in the Mission, they would all have got this respect from their seniors in the Mission. These days this does not happen even in our families. But the Chinmaya Family was created by Gurudev and the love and respect flows from him.

Just have a look at any of our acharyas, mentors. They have done this for their wards. They have learnt it from Gurudev and that is the reason they are able to give it to us! Guruji too would say the same thing. “I knew nothing, but by being with Gurudev I improved.” Love combined with respect.

I have seen that it is not one’s ability that is the benchmark at Gurudev’s Mission, but making yourselves available to the mentor, allowing him to shape, mould and correct you. That is where your own love and respect (at an individual level) comes in.

How does the Acharya/mentor attain such level of greatness? ‘The Pledge’ also looks into this matter. It seems that Gurudev’s intention was that once we adopt the Pledge, the Pledge takes over. We are one family and everyone is working for the same family (same vision). There may be difference in opinions. How we accommodate differences in the same family is through understanding that we belong to the same father and by buying into his vision.

That is respect – That is what I found to be respect. The acharyas in turn make you another mentor!

Gurudev said in the Pledge, “May Thy grace and blessings flow through us to the world around us.” But this is what he did! He allowed the grace to flow out to everyone! We as recipients of his Grace, sometimes we may be guilty of not letting it flow out.

This is where the other line in the Pledge comes to remind us,

“We live honestly the noble life of sacrifice and service

producing more than what we consume and

giving more than what we take.”

This is how He lived and showed us. He wanted us to be like him without saying that. So what he has put down in ‘The Pledge’ is just an instruction manual for us to become like him. If you remove ‘We’ and replace it with ‘I’, we will see Gurudev. And to live the pledge is very difficult.

Pujya Guruji made 7 chantings compulsory for the people in the mission and is called ‘Go to Basics’. We are supposed to memorise and know them by heart. One of them is ‘The Pledge’. But what it really means is we have to live according to it. It is a commitment, a promise to ourselves. This shows the visionary in Gurudev, what he wanted us to do, he has put it in ‘The Pledge’!! He has begun ‘The Pledge’ with, “WE STAND AS ONE FAMILY, BOUND TO EACHOTHER WITH LOVE AND RESPECT.”

This is the starting point; the primary building block of a good organisational setup. Gurudev knew how the human mind works and He knew that this is how it has to corrected.

You should not confuse “Bound with love and respect” to the love for possessiveness and respect out of fear. Love is that which accompanies respect, giving room and acceptance for diversity and difference.

Chinmaya Mission has a place for everyone. No matter what you are.

You join Chinmaya Mission to belong. That’s it!

Gurudev wanted us to evolve from a ‘Group’ to a ‘Family’. A group is just a collection of people. Better than a group is a TEAM, which is, a ‘group’ with a common goal. And to achieve that goal, there may be instructions and specific guidelines. But a ‘FAMILY’ is a group/team joined with a special factor called love. Yes! We at Chinmaya Mission is comprised of a group of people, but Swamiji wanted us not just to be a group, but be a FAMILY. ‘Kutumbam’ (Family) as it is called in Malayalam can be said as, ‘Koodumbol Imbam Ullathu’ – where ‘Koodumbol’ is ‘coming together’; ‘Imbam’ is ‘pleasing’ and ‘ullathu’ means ‘that which is’. Hence, Family is that which is pleasing.