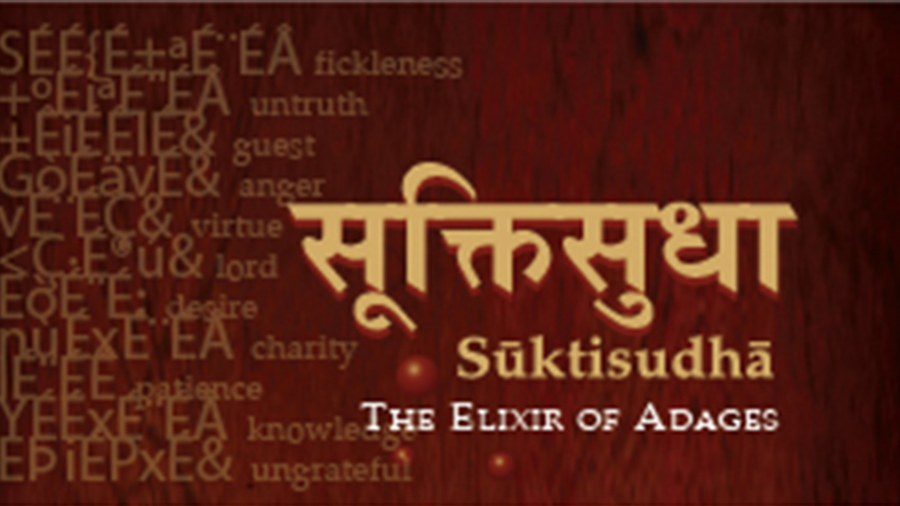 It is a common technique in public speaking to quote great people or major literary works. Those who’ve been educated in English are used to quoting Gandhi, Lincoln, Jefferson, Shakespeare. Lately, it has also become cool to quote Chinese proverbs or Chinese classics such as “The Art of War” by or the “Tao Te Ching” by Lao Tzu. It is understandable because these are most easily sourced via popular quotation books and websites such as Wikipedia.

For those who have wished for a good source for old Hindu adages, “Sūktisudhā – the Elixir of Adages” is a wonderful new publication from the Chinmaya International Foundation (CIF) in Ernakulam. This scholarly work was originally initiated by Dr A. Ramaswamy Iyengar (former director CIF) and the renowned Sanskrit scholar, the late Dr B.S. Ramakrishna Rao. After almost shelving the project for want of the right scholars to lead the editing and translation, Swami Advayananda was fortunate to meet Dr C.N. Ratnam, retired professor of Sanskrit, Maharaja’s College, Ernakulam who spearheaded the translation and editing of this tome. Swamini Aaradhanaananda (at the time known as Brni. Vividisha), editor of Balvihar magazine, joined the team to provide a contemporary flair to the translation and editing.

The term sūkti means adage, maxim or aphorism. The sūktīs cover a vast range of subjects. Sourced from over 120 different religious and literary works ranging from the Mahābhārata to Kalidāsa’s various works, Purāṇās such as Skandapurāṇa and Vishṇu- purāṇa and more familiar sources such as the Pañchatantra and the Bhagavad Gita.

The adages are categorized into 200+ topics starting with ati (excess) to prajña (intel- ligence), shurāḥ (heroes) to hitaṃ (the beneficial).

Some of the sūkti-s that caught my attention were:

• Know someone who studies a lot but does not seem to accomplish much? You can tell him simply – हुतं ज्ञानं क्रियाहीनम्. hutaṃ jñānaṃ kriyāhīnaṃ or “Knowledge devoid of action is as good as dead or totally waste.”

• When I told my 13-year old son, दशपुत्रसमा कन्या – daśaputrasamā kanyā – “A daughter equals ten sons”, he retorted, “You can barely handle me, can you imagine having ten of me?”

There is an interesting word of caution upfront with a big “Read this First” title “The Sūktis reflect the vast gamut of human psyche, endeavour and experience. Indeed, not all Sūktis are expected to jell with everyone’s thinking. Accept what you find agreeable, reflect over those are partially disagreeable and skip over those you find rank disagreeable. Wish you an enchanting expedition through the realm of thoughts, feelings and emotions.”

The absence of commentary is refreshing because the text is never preachy. In fact, this allows the reader all the freedom to interpret, to accept or to skip over one or the other aphorism. The book is beautifully produced with interesting illustrations highlighting every topic. The book is a labor of love and it is clear that the compilers, editors and illustrators have given it their all.

In his preface, Dr C. N. Ratnam, states that, “The waters of the ocean can be contained in a shell. Deep ideas can be reduced to apt, effective and beautiful Śūktis”. The Śūkti- sudhā, has effectively placed the “Elixir of the Ages” within the reach of every reader. Drink from it as soon as you can and as much as you can absorb.

Chinmaya International Foundation (CIF), established in 1989, is a research centre for the advanced study in Sanskrit and Indology affiliated to Rashtriya Sanskrit Sansthan, New Delhi and recognised by Mahatma Gandhi University, Kottayam. Pujya Swami Chinmayananda visualized CIF as “a bridge between the East and the West, past and present, between the pundit and the public”. Since it was established in 1989, CIF has compiled an impressive body of research and publications and is actively driving various initiatives in digitizing ancient Hindu texts.