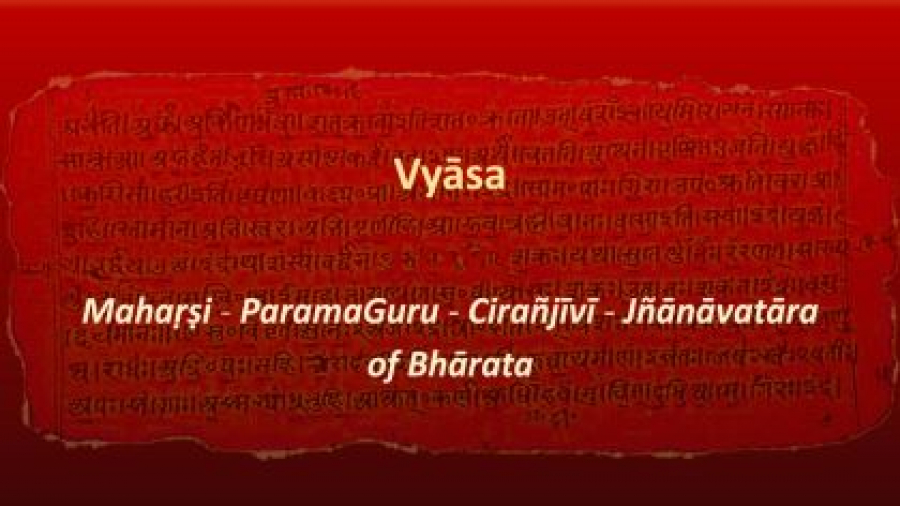 The (‘great sage’) Vyāsa was born Kṛṣṇa Dvaipāyana (‘dark, island-born’) in a swirling mist on the Yamunā at Kalpi, in an illustrious heritage of knowledge and learning, the son of Parāśara and Satyavati, and great-grandson of saptaṛṣi Vasiṣṭha.

‘Vyāsa’ means compiler, arranger, disseminator of knowledge. Kṛṣṇa Dvaipāyana came to be known as Veda Vyāsa for his momentous work on systematically collating the vast canon of the Vedas (‘true knowledge’), at the behest of the preceptor of his youth ācāryaVāsudeva, into what we know today as the four pillars of vijñāna, the śruti (‘heard wisdom’) of Ṛk Sāma, Yajuḥ and Athrvaṇa .

Vyāsa also wrote the Brahmasūtras, which skillfully summarise the spiritual philosophy of the Upaniṣads in a clear and consistent form, and which remains one of the enduring foundation scriptures of Vedānta teaching. In addition, he was also the compiler of the eighteen principal Purāṇas, the expansive corpus of smṛti (‘remembered tradition’) in the extensive literary heritage of Bhārata.

As the dark clouds of dynastic fratricidal war gathered inexorably in the empires of Northern Bhārata, and when devaṛṣi Nārada came to meet the mahaṛṣi to speak to him of the impending conflict and destruction of his own descendents, he also called him by the sobriquet Bādarāyaṇa, thought to be a reference to his abode under a badarī (jujube ‘red date’) tree, or perhaps to his hermitage and āśrama, Badrikṣetram, in Uttarakhand.

In the aftermath of the Great War of Kurukṣetra, Veda Vyasa  narrated its multifaceted history (Itihāsa), which he had composed in the epic hundred-thousand verse poem the Mahābhārata, to the ‘divine scribe’ Gaṇeśa. Gaṇapati’s condition to Vyāsa of not stopping his narration at any point once begun, was famously countered with the sage’s own stipulation that the Celestial of Wisdom would inscribe only that which he had understood fully. The witty Vyāsa knotted the meaning of his composition tight, so even the omniscient Gaṇeśa had to pause often to grasp its essence. The narrator and scribe arrangement worked well.    Gaṇapati occasionally also calls him Nīhāraputra (‘Son of the Mist’) during their legendary encounter, in humorous and affectionate reference to the unique circumstances of his birth.

The monumental Itihāsa of Bharātavarṣa was in some respects a divergence from Veda Vyasa’s previous works, born of the need to record what was a painfully traumatic and ultimately tragic experience for the great poet-sage to have witnessed, but one he felt had to be documented for posterity.  Possibly his most well-known, loved and revered work, the Mahābhārata of Vyāsa towers above anything else written in any civilisation, as the longest and richest epic in the history of human scriptural and literary endeavour.

That which is in this epic on dharma, artha, kāma , mokṣa

That which is not in this epic is nowhere else

The Mahābhārata of Vyāsa

And at its heart, in seven hundred verses spanning eighteen chapters of the Sixth Book of Bhīṣma Parva, is the jewel of sanātana dharma, the very essence of the Upaniṣads and the profound spiritual-philosophical teachings of Vedānta: the resplendently beautiful and lyrical Song Divine of his namesake and central iconic figure of the great epic, Kṛṣṇa Vāsudeva, the Bhagavad Gītā.

whenever there is indeed a decline of dharma (righteousness), O Bhārata,

and a rise of adharma (unrighteousness), then I manifest Myself

and for the establishment of dharma (righteousness), I am born from age to age

also of sages I am Vyāsa, of great thinkers the seer Uśanā

A beautiful temple honouring the mahaṛṣi, built in the ancient Vedic single-tower carved stone architectural style, graces the banks of the Yamunā River at his birthplace of Kalpi.  The annual commemoration of Guru Pūrṇimā, also known as Vyāsa Pūrṇimā and Āṣāḍha Pūrṇimā, marks both the day of his birth and the day he completed his magnum opus on compiling and arranging the Vedas. It is a fitting tribute and homage of an ancient civilisation to the incomparable jñānāvatāra (‘knowledge incarnation’) of Bhārata, whose rich, luminous and timeless legacy of erudition, knowledge and wisdom lives on, a hallowed gift of whom we are descendents and beneficiaries, each day of our lives.

so does the fire of knowledge reduce all actions to ashes

Audiovisual version can be seen on: